How to Make a House Energy Efficient

Finding and sealing a crack on the exterior of a house will help to reduce air infiltration and exfiltration on the inside.

Because of the large size of plywood and OSB sheets, there are relatively fewer seams in the sheathing on newer homes. And the use of products like house wrap on new construction has further reduced air infiltration (see Fig.1). Consequently most new homes are more airtight than older ones. But although the sheathing might be more airtight in a newer home, there are still many places where air is getting in and out. Finding and sealing those leakage points not only reduces drafts and energy usage, but it also helps keep out insects and other pests. 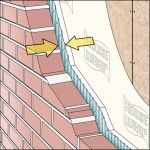 HVAC  (heating, ventilation and air conditioning) system installers need to bore a large hole through the exterior wall of the house in order to pass the refrigerant lines through to the compressor outside. Most people take the time to caulk (one of several different processes to seal joints or seams in various structures and certain types of piping) the hole around the lines but the caulk fails over time, often leaving a gap where the air and insects can infiltrate the house. A few minutes spent with a caulk gun will close the gap and shut off the flow of outside air into the house.

Some people find that once an older home has been freshly painted, they suddenly feel warmer or “cozier” inside during the winter which may be because the painter who worked on the house took time to caulk cracks, gaps and other holes in the home’s exterior “skin.” While minute gaps around doors and windows might not seem as though they could possibly add up to much, under certain conditions it is surprising how much air they can let into and out of a house when left unsealed e.g. consider a windy day where the wind drives the air into gaps and around obstructions combined with rain to the mix which results in both water and air infiltration hence a colder, worn house which consumes more energy used than is needed to keep the house warm. For this reason, caulking really contributes to both energy savings and building preservation.

The wooden framing in most homes rests on top of a solid concrete or concrete block foundation. In homes built before 1980 or so, the lowest section of wood called the “mud sill” rests directly on top of the concrete. While the connection is secure from a strength standpoint, in terms of eliminating air infiltration, a problem arises from the rough and variable surface of the top of the wooden foundation wall where there are certain areas that leave a gap through which wind can enter despite the many areas of the wood which press down tightly on the foundation and prevent gaps forming.

The gaps might collectively add up to a hole the size of a basketball in the exterior envelope so it is important that they be sealed with either caulk or cans of spray foam. This procedure, which can be done either on the inside or outside of the house (depending on which offers the best access) requires that you first brush away the dirt, cobwebs and other debris from the concrete and wood so the caulk or foam will stick to both surfaces.

From that point on it’s just a matter of aiming the caulk tube’s tip or spray foam applicator tube at the gaps and filling them with caulk or foam.

Note: In newer homes, the gap between the mud sill and the top of the foundation wall is filled with a thin, compressible length of foam material. The foam creates an airtight seal that does not need remedial caulking or foaming. However, it’s worth checking along this area anyway, as occasionally the foam sealer didn’t get placed exactly where it should have been. Also, the top of the foundation wall might be too uneven for the foam to fill the gap, someone might have forgotten to put it in place, or it might stop short of the corners. In any of those cases, a shot of caulk or foam can quickly remedy the problem.