In comparison to other more established pipe materials for plumbing such as copper or lead, PEX tubing material is the relatively most recent, having been made available in great numbers in the past few decades. PEX tubing material (also known as Cross-linked polyethylene, commonly abbreviated PEX or XLPE) is a variant form of the polymer polyethylene although it has a cross-linking structural feature i.e. there are chemical bonds not only connecting the large, self-repeating units horizontally across each of the long polymer chains but also connecting each and every polymer chain from a vertical direction, almost forming a net like structure. Because of this cross-linking, the PEX polymer structure changes from one being thermoplastic (being flexible when exposed to heat) to that of thermoset (a hardened structure that doesn’t deform when subjected to moderate temperature) . Note: PEX does not have a very high degree of cross-linking as this would result in brittleness and stress cracking of the material. 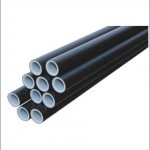 PEX has been observed to be increasingly used in plumbing over traditional materials such as copper because PEX offers many advantages due to its chemical structure. The advantages of PEX are:

PEX can be installed in longer, flexible, lines using less fittings compared to much heavier tubing materials like copper which have to be secured in place. When it comes to installation, the flexibility, light weight and easy fitting of the PEX tubing greatly reduces the amount of time and effort required to re-plumb a house or installing plumbing in a new home build.

Using PEX pipe for your plumbing needs is very cost effective since the market price for copper metal has increased, making copper pipes more expensive compared to a few years ago. There are cost reductions in not having to spend on extra fixtures and fittings in comparison to copper pipes which means less money is required to be spent on labor costs.

3) Water quality using PEX tubing is not a concern

PEX’s smooth interior resists the prevents corrosive materials and minerals accumulating inside the pipe such as lime scale and because it’s flexible plastic tubing, it is able to resist the damage freeze causes when water expands and solidifies during cold weather by stretching in comparison to the rigid structure of metal pipes.

PEX piping is known to be able to deliver its water supply to property owners at a high quality. After considerable debate, it was found that PEX piping material showed no signs of leaching or metal contamination in the water supply, so there are no related health concerns.

A word of caution

PEX tubing is not suitable for outdoor applications because it won’t hold up under hard freezing and thawing conditions. And it should never be exposed to UV light as this type of radiation has enough energy to break down the material and cause it to fail. Therefore PEX plumbing should only be used for indoor plumbing applications and away from sunlight.


2 Comments for Plumbing and PEX Piping

Thanks a lot for being the lecturer on this area. We enjoyed your own article quite definitely and most of all cherished how you handled the issues I widely known as controversial. You happen to be always quite kind towards readers much like me and help me in my lifestyle. Thank you.
My Bolg : DepressionSymptomsMedication.com