The exterior of a home can be thought of as an “envelope” or “shell.” Sealing the envelope or shell against air infiltration (air entering the house from the outside) and air exfiltration (air escaping from inside the house to the outside environment) helps reduce energy costs for central heating and air ventilation. Hence draft is also reduced.

To test for leaks which are responsible for high energy costs, technicians use a “blower-door test” to accurately measure air leakage in houses. The test involves sealing a portable, frame-mounted fan in an exterior doorway to the house. Any known openings to the outside, such as the fireplace flue; bathroom vent fans; and the flues to the water heater, furnace, or boiler are temporarily sealed to determine the location of the other leaks which haven’t been found. After the sealing and setup is complete and the blower fan is switched on, it is possible to measure with precision how much air is entering the house through all the various “unintended” cracks, gaps, and holes in the exterior envelope. Using devices called smoke pencils, technicians can pinpoint areas where air is entering the house while the blower door is in operation as the unknown leaks will pass air through and visibly disturb the smoke pencil’s smoke trail, allowing the location of the smoke trail to be detected.

Fig.1: a smoke pencil being used 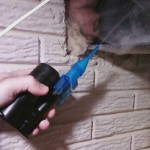 While every home is different and each has its own set of leakage points, there are areas where infiltration shows up repeatedly in blower-door tests, these often include:

A homeowner can increase their home’s energy efficiency by locating and sealing up as many of these entry points as possible.

Note: You don’t necessarily need to have a blower-door test done on your home in order to locate the unsealed areas that are leaking air. Knowing that these are points of air entry and that they have been routinely and consistently identified in other houses gives you a good idea on where to look for gaps and cracks in your house. Also a windy day outside can be helpful as wind can push air into the house through unseen and unnoticed holes to the point that you can feel the air movement.

Before plywood and oriented strand board (OSB) were invented, homes were built entirely with solid board lumber. The exterior was sheathed underneath the siding with wide boards that over time shrank and cracked. All these cracks and the many others inherent in most homes are pathways through which air can enter or leave a house. Sidewall sheathing is covered with siding, so all those cracks that appear in and between wide boards on older homes are hidden and inaccessible.